Quarantine Series: The History Of The Barn

We get asked all the time about the history of the Barn. We usually just tell everyone that the Barn is coming up on its 100th anniversary as an antique store and offer a brief history. But since we have some time we thought we would give a more detailed history. Some dates and facts we know for certain because we have the historical and legal documents as well as old advertisements and newspaper articles to back them up. And some of the history is from stories that have been past down.

The Barn is actually two attached buildings as you can see from the photographs that are at the bottom of this article. The larger two story  building is “The Barn”. The other building was an addition we now call “the front room”. The Barn is believed to have been built in 1827. That is the date attached to the photos in the region of Peel archives. But who built it, its original location and exact age are unknown.

The building was about 90 years old when it was purchased by Sydney Preston in 1917. It was moved to Clarkson road and Lakeshore road and operated as the Clarkson Fruit Market. Fun fact: Clarkson was once known as the strawberry capital of Ontario. The Barn was moved for a second time a few years later, to its current location. About 30 years ago we bought some antiques from an elderly gentleman who told us that when he was a young man he had helped move the Barn to its current location. He said it was pulled by horses and rolled on logs. His job was to take the logs from behind the barn and run them up to the front of the barn so that it could continue to roll. He of course was a part of a team of young men who did this. I’m sure it was quite the undertaking.

Grace Fairbairn began working with Sydney Preston and started using part of the barn to sell antiques. We believe this stared in 1918 as Clarkson Market Antiques. If that date is accurate the Barn has already passed its 100 year anniversary as an antique store. There is an advertisement in the 1923 Highways and Byways of Ontario Automobile Road Guide which states: “This building is now the central clearing house for the antique treasures of rural Ontario, filled with the things that give joy to lovers of the artistic and useful. Mahogany and walnut, from the massive four-poster to the dainty tea-caddies, old china, brass, Sheffield plate; also Canadian handcrafted pottery, metal work, home hand-braided rugs, and original decorative work. Visitors welcomed.”. The amazing thing is that aside from hand-braided rugs we still carry all those items 97 years later. Although I wonder what Grace Fairbairn would think of the bobblehead garden gnomes and pink flamingos which we also sell?

What we no for certain is that the Clarkson market sold fresh fruit and vegetables as well as antiques. The business grew quickly and attracted collectors from across Canada and the United States. Hear is a link to an amazing article about the Clarkson Market and Miss Grace Fairbairn from Maclean’s in 1924.
https://archive.macleans.ca/article/1924/11/1/mixing-human-nature-and-business;-making-a-real-success-of-it

In 1931 Grace Fairbairn purchased the barn from the estate of Sydney Preston. We recently discovered from tax records that the current “front room” was built in 1932. We had long believed that it was built in the 1920’s. Grace and her sister Agnes ran The Clarkson Antique Market into the 1960’s. In their later years the sisters lived across the street and would sit on their porch. If they had a customer they would walk across the street.

Alice Millar bought the building in 1966 and ran the business as Heritage House Antiques. She was not as successful as the Fairbairn sisters. The building was divided up into individual booths and was similar to how many antique markets are laid out today. The business soon closed and had been shuttered for some time when Frank came into the picture in 1969.

Frank is the current owner of The Barn. He goes just by Frank because no one ever pronounced his last name correctly so he just gave up and went with Frank. In 1963 Frank was 20 years old and trying to make money to put himself through university. Having the entrepreneurial spirit he rented out a farm and decided to turn the farmhouse into a rooming house. He figured if he rented rooms by the week he could make more money than if he rented by the month. Two or three extra days every month would make a big difference to the bottom line.

Frank needed cheap furniture to furnish his rooming house and came across a junk store at the corner of George Street and Randal street in Oakville. For reasons that have never been clear the owner of the store asked Frank if he wanted to buy the store. Frank has always liked buying more than selling and he agreed to buy the store. In 1963 “The Nook” of Oakville began. Frank quickly realized that antique dealers, store owners, and auctioneers would buy more product than retail customers. So the business became predominantly wholesale, and Frank quickly developed a large clientele among antique dealers and auctioneers. Frank preferred selling on low margins with high volume, that is still how we do things today. Frank couldn’t find enough antiques locally to keep up with demand, so he began to travel in search of product.

By 1969 Frank had outgrown “The Nook” and it was closed. Because his business was predominantly wholesale he didn’t need a retail location that was open most days. What he needed was a warehouse, and in 1969 Frank began renting the Barn as a warehouse. He travelled as far west as California, as far east as Newfoundland, and he spent about half of 1969 in Texas. If you get him on a good day he will tell stories about cowboy boots and snakes from his Texas days. When he had acquired enough inventory he would call his wholesale clientele and they would come to the Barn to buy.

By some point in 1970 Frank had developed a schedule and a network of suppliers in the United States and began opening up The Barn three days a week, Friday, Saturday, and Sunday. The business was called A & A Antiques Fine Furniture and Antiques, to be first in the phone book. That was very important at the time. But everyone just called the place The Barn, for obvious reasons.

Frank’s schedule was brutal. He would hit the road Sunday night around midnight, drive to New York, or Philadelphia, or Cleveland most weeks. He would drive a 40 foot semi truck, and buy enough to fill the trailer. He would pack the trailer himself, he got so much practise over the years that he became the world’s greatest packer. He would drive back, and unload Thursday night. On Friday morning he would meet all the antique dealers and auctioneers for breakfast at a dinner that used to be across the street from The Barn. He would sell as much as possible on Friday, Saturday, and Sunday. Than hit the road again Sunday at midnight. He did this nearly every week for 19 years. He developed such a good network of buyers in Cleveland that some weeks he would go there twice. The most trips he ever did in a year was 66. This schedule took a tool and after 19 years Frank decided to get off the road. He had had enough of hotel rooms. And to this day he still hates to travel. But it paid off, after many years of renting Frank managed to buy The Barn.

During this time the business did have retail customers and film and television production customers, but the focus was wholesale and volume. The business just wasn’t geared to retail. For one thing there was no price tags on anything, there wasn’t time. The turnover was too quick. Frank would just do the math in his head when someone wanted a price. There was often four to six trucks outside each one belonging to a customer who was buying dozens or hundreds of pieces, so there just wasn’t time to spend on retail customers who only wanted to buy one or a few pieces. The Barn was extremely busy in those days, it was controlled chaos. And like during Grace Fairbairn’s time customers started coming from all over Canada and the United States and even further. We have had customers come from as far as Tokyo Japan and Aqaba Jordan.

It wasn’t just antiques, Frank always sold new items or reproductions as well. I will talk more about reproductions in future posts. After Frank got off the road we started carrying more reproductions. Buying more direct from the public locally. We bought an endless number of estates. Frank always did like buying in quantity. And we started importing containers. Over the years we’ve imported containers of new and antique product from England, Scotland, Romania, Hungary, Vietnam, and China. There may have been more, those are just the one’s we can remember. Over the years we’ve also made deals with lots of different business partners to acquire products and containers from dozens of countries.

Over the last forty years the business has changed a lot. Free trade and the collapse of the antique market changed things tremendously. We were open 7 days a week for many years, now 6 days. And now we predominantly sell to retail and film and television production customers. However we still do sell to the trade. Antique dealers show up almost everyday at The Barn. Or they did until Covid19 came to town. These days antique dealers rarely show up with trucks wanting large quantities of antique furniture, though that does still happen occasionally. These days the remaining antique dealers are mostly looking for smaller items like sterling silver, or bronzes, or cups and saucers, etc..

We used to often ask Frank when he was going to retire. But we gave up on that years ago. He likes to work. The part of the story that I have yet to mention is that for a few years in the 1960’s Frank was operating The Nook in Oakville, and the Fairbairn sisters were still operating The Clarkson Antique Market[The Barn]. Frank actually bought some antique pieces from the Fairbairn sisters. He said they wouldn’t let him in unless he took his boots off. They didn’t want him tracking mud around. They provided him with little booties he could wear. Frank still shakes his head when the occasional customer wonders aloud why they aren’t allowed in The Barn with their coffee cups. The Fairbairn sisters would have been aghast. If you ever happen to mention this article to Frank he probably won’t know what you’re talking about. He will probably never read this. These days he tolerates certain aspects of the business like having a website, but he doesn’t pay any attention to them. He still likes buying and selling antiques though. 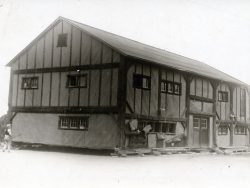 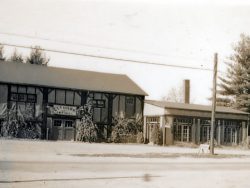