At The Barn we’ve always liked a challenge. Every year we seem to take on a couple of what we call “Big Projects”. We don’t go looking for these big projects, they always seem to find us. They are often how we acquire some of our best merchandise.

A little over a year ago, a furniture refinisher who had decided to retire after about 30 years in business came into The Barn, and offered us all the leftover stock he had accumulated over the years for free. There was a couple of catches. First we had to pick it all up, and it was scattered among a bunch of storage units in Scarborough. Second, he didn’t know exactly what there was. Whether or not there was enough good pieces among all the pieces that were missing parts, broken items, and junk, to make it worth our time and effort.

We decided to take a chance, and seven truck loads later, everything had arrived at The Barn. It turned out to be mostly sets of chairs. Lots and lots of sets of dinning room chairs. Everything required a thorough cleaning, some items had been collecting dust for a couple of decades. Also, lots of chairs were beyond repair. The worst part was that dozens of chairs were missing seats. Before the collapse of the antique market that would not have been a problem. But these days with the prices of dinning room chairs being so low it is a problem. It doesn’t make good business sense to spend $50 or more to make a seat for a chair that you are going to sell for $65 dollars. So we gave away at least a couple of dozen sets of chairs that were missing seats. We did manage to salvage dozens of good sets of chairs and some other good items. However when you factor in all the time we spent on the project it wasn’t a great deal for us. If we had known in advance we would have passed on the project.

These types of project often take months or even years to complete. We were cleaning the last few sets of chairs from this project in March, the day before we shutdown for covid lockdown number one. Sometimes it can take years for us to turn a profit on one of these projects, but they usually work out in the end.

Eight years was the longest one of these projects ever took. In the 1980’s we bought out the last remaining manual cash register repair shop in Toronto. There was every type of cash register imaginable: brass, nickel plated, wood, metal, faux wood on metal, giant oversized cash registers, regular sizes, miniatures, and the most popular and expensive type at the time was the small narrow ones. They were so heavy that we couldn’t even fill up a truck. We just loaded a truck until the backend was dragging on the ground. Drove to The Barn, unloaded, and went back for another batch. No one remembers exactly how many cash registers there were, but there was hundreds. There was even and entire truck load of spare parts.

We brought a dozen or more in The Barn, one or two of each type, and sold them one at a time. As they would sell we would bring in more. Some were in perfect condition, many required repairs, and some were beyond repair. They were in demand in the 80’s and sold well. But they are much more in demand these days, we get asked for them all the time.

I remember it took two years for us to break even on the deal, but in the end it turned out to be highly profitable. In case you are wondering, the brass cash register that is behind the counter at The Barn was there before this deal. Its been there for so long we don’t actually remember where it came from.

Another big project that comes to mind is we once bought out a shoe factory, that had gone out of business. This was a great deal for us. You may ask, “what great items did we get from a shoe factory?”. Well of course the answer is 800 fantastic wine racks. The shoe factory had been using terrific old wooden wine racks, they must have gotten from a vineyard, to dry their shoes. They were such a great price and sold so quickly, that nearly every week for a couple of years we would bring in a fresh pickup truck load of wine racks.

The chair that I’m currently sitting on came from the legendary Poor Alex Theatre in Toronto. They had hundreds of chairs from productions over the years sitting in their basement. One day they decided it was time for all the chairs to go and we bought them all. Chairs that get used in theatre productions take a great deal of abuse. Nearly every chair needed to be glued and cleaned. I spent an entire summer gluing and oiling chair after chair after chair until I eventually came to a quarter cut oak desk chair that was in perfect condition. I decided to keep it and more than 20 years later it still doesn’t need to be glued. Some things are just made right.

These are just a few examples of the many big projects we have undertaken over the years. I have no idea what our next big project will be. It seems like a lot of things are in a holding pattern right now because of covid19. But sooner or later someone will walk through the door and say, “I have an unusual deal you might be interested in?” 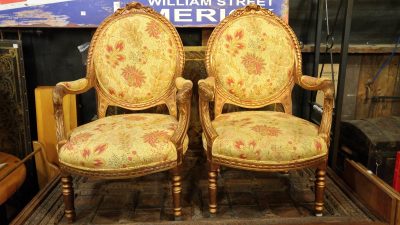 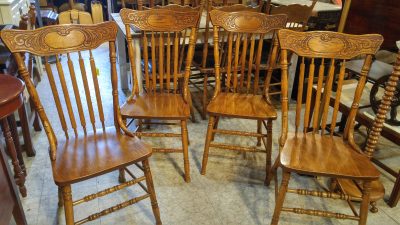