Sometimes a customer will come into The Barn and say something like: “Do you remember the mahogany sideboard I bought from you, 30 years ago?”. The truth is that unless you bought something very recently or your piece[s] was unusual in some memorable way, we probably won’t remember. We have sold too many pieces over the years. We have bought so many estates and made so many deals over the decades that only certain memorable deals stand out.

Since we just finished with the holidays, maybe I’m felling nostalgic. But writing last week’s “Big Projects” post made me think of what is perhaps the most talked about deal in the history of The Barn. Talked about among people who were involved in the project that is. So since we have some time for nostalgia during the lockdown, here is the story of the Atlanta mansion.

In 1978 The Barn was open three days a week. Back then the vast majority of our business consisted of importing antiques from the United States and selling them wholesale to auctioneers and antique dealers. Please keep in mind that prices of items were very different back then. It cost far more to furnish a home in those days than it did to buy a house. A bedroom set cost more than a car. This was long before free trade or the collapse of the antique market. The prices and market for consumer goods were very different than today. And nearly everything we bought was done in cash and in U.S. dollars.

Back then, Freddy Rotundo of York Antiques in New York was one of our best suppliers. In the summer of 1978 he bought an estate in Atlanta, Georgia for $85 000. It was the estate of a man who back then was referred to as an “auction nut”. No one remembers the name of the man, but before passing he used to attend auctions regularly, and he bought and bought. These day’s we would call him a hoarder.

Freddy was only interested in the best pieces from the estate: high end paintings, a collection of bronzes, and a few high end pieces of museum quality furniture. He had buyers for those type of pieces.

What was left over was a mansion full of antiques and seemingly random items. The attic was full of 45 gallon oil drums, each one containing a different item. One was filled with Baccarat crystal decanters, the drum sitting next to it was filled with screwdrivers. No one knew exactly what there was until it was all sorted. But there was just about everything you could think of.

Frank [the owner of The Barn] made a deal with Freddy to buy the remainder of the estate for $35 000. He sent a team down to Atlanta to pack everything up. There were three main challenges in getting everything ready for transport. First, Atlanta in the summer, the heat was extreme.

Second, nearly everyday someone new would show up claiming to be a long lost relative and saying that certain items were promised to them. It was well known that there was quite a collection stored in the mansion. There was a valuable coin collection somewhere, that was purchased at auction many years prior. Many people knew about the coin collection, as well as the other valuable items that were purchased at public auctions over the years. The vultures were circling.

And third was the lions. Some things are just to strange to make up. This was a mansion in a neighbourhood of mansions. At the time one of the neighbours had two lions that were used as guard dogs. There was a schedule, and at certain times at night the lions were let out for exercise. Everyone in the neighbourhood new to stay inside during those hours. As I said, it was a different time.

It took weeks, but in the end everything fit in two well packed 45 foot trailers that made their way back to The Barn. Frank spent evenings for three months sorting through everything. The valuable coin collection was never found. The main problem was that most things weren’t looked after. Nearly every piece of fancy china or crystal had a chip or a crack, which destroyed the value.

There was lots of great antique furniture, lighting, artwork, and just about anything else you can imagine. Items sold, but the expenses and time invested were considerable. Not to mention the $35 000 U.S. that needed to be recouped.

Frank remembers that a year later he sold a glass vase that was left over from the estate, which after factoring in expenses and time was the sale that finally turned the deal profitable. It wasn’t a great deal in the end, but certainly a memorable one. It was such a memorable experience that Frank kept a piece from the estate. A hideous capodimonte center piece that he still has at his home. I’ve attached a photo.

It seems like I’ve written about several of the deals that haven’t worked out so well lately. There have been a lot more good deals than bad ones over the years. But every poker player will tell you that they remember the big pots they lost more vividly, than the big pots they won. 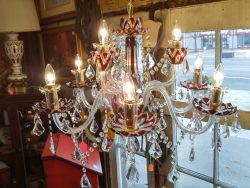 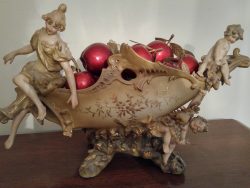 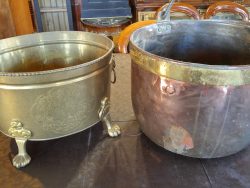